Every boat owner knows this: In order to solve a problem, you are confronted with other small problems.
A heavy storm raged over Vietnam's coast and brought us the desired wind shift in Palawan and a time window of 3 days to reach our next destination Nasugbu.
In Nasugbu on the main island of Luzon there is a small primitive shipyard that gives us an acceptable price offer for our overdue land stay for Odin. (Emphasis on "acceptable"...not cheap!)

The course is close to the wind and therefore "uncomfortable". After the first 50 nautical miles the gear of the outhaul stretcher gives up.
No problem, because we can also operate the sail manually and then order a new gearbox from Germany.
Another 50 nautical miles further, the autopilot suddenly went on strike.
Now, that's a problem!

After a few tests, it becomes clear that it is the Motor of the Autopilot.
Of course we could also control by hand. Every Mediterranean charter sailor does that. But believe me, with the swell this is no fun for days.
So with the course hard upwind I removed the Motor, look for the problem, and reinstall it.
It did not work!

Frel stands at the helm for 5 hours and steers Odin towards the west while below deck I try not only to keep my lunch in me with the fluctuations, but also not to lose the various individual parts of the autopilot with the pounding.
I installed and removed the engine 5 times until it finally worked properly again.
I am proud and in my mind I award myself the gold autopilot repair medal on high seas.

Until we reach Nasugbu everything is going great from now on.
We anchor in front of the small shipyard while there is a noise from land like at the Oktoberfest……..Only worse!

Various karaoke songs, performed by talent free singers, roar from various large speakers with a rattling sound. It hurts my ears, but the Filipinos enjoy it so much that we can only sleep with earplugs at night.

Well, it was probably a party and they should have fun.
But worse was to come!
After Odin was craned ashore we were right in the middle of the action!
Even before the sun comes up someone is already terrorizing his microphone and speakers at full volume.
With the consumption of high-proof rum during the day, the already non-existent singing talent is further reduced. Only the volume of the troubadour, now convinced of his talent and his nightingale-like Voice multiply his loudness.

I would love to catch everyone and tie them all to a tree like Asterix did.

But you can't!
They are way too many!

In addition to this background noise, there are also countless fighting cocks that incite each other to crow and, as if that weren't enough, campaign jingles with music and singing or campaign slogans from various provincial politicians or presidential candidates play non-stop from even louder loudspeakers.
If I survive this karaoke hell without sustaining any serious physical damage, I'll award myself the gold karaoke survivor hero's cross with ribbons and diamonds and microphones.

But back to Odin.
On such a long journey through tropical countries, one quickly gets used to the minimalism of the available means, but is always surprised that things can be even more minimalistic.
Everything is done by hand, no machines are available to the workers and so it takes 10 days for 4 workers to remove the old antifouling from the underwater hull at the Filipino work pace.

Even the working hours are minimal!

The official start of work is at 8 a.m. Around 8:20 a.m., the workers dawdle in order to take a 30-minute break shortly before 9 a.m., which usually ends after 45 minutes.
Lunch break is at 12!
But it starts at 11.45 a.m. but then you come back half an hour later from the break to take a cigarette break before continuing your work.
When work resumes shortly before two, it is interrupted again shortly before three for a half-hour, 45-minute afternoon break.
Well then back to work to drop all the tools in good time 15 minutes before the end of work at five.
Since the workers here are only semi-skilled workers, you have to be extremely careful not to work according to the motto "violence is also a solution".
For example, the "specialists" tried to hit the propeller shaft with a sledgehammer to pull off the propeller. However, the propeller shaft ends in the gearbox, which is not designed for such brutal treatment.
When removing the gear for the outhaul, fastening parts of the boom were broken off and now have to be repaired by a specialist brought in from outside.
Just finding one is a problem in itself.

So the work is delayed day after day while the karaoke background noise of the talent free singers gets on our nerves.
Sequel follows! 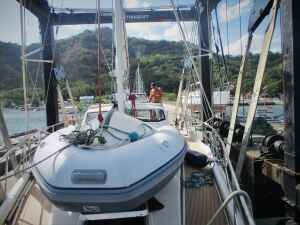 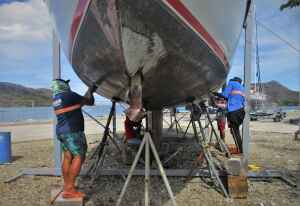 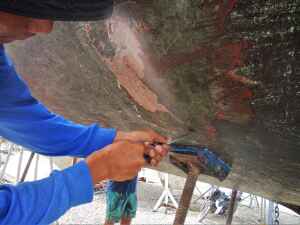 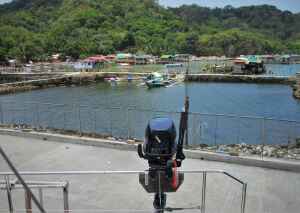 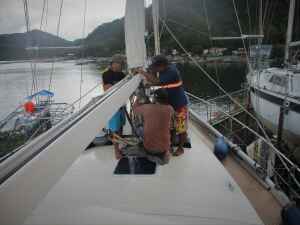 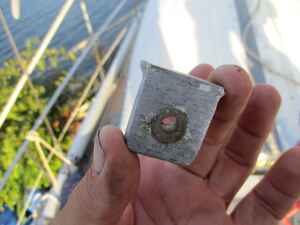 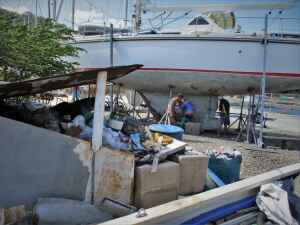 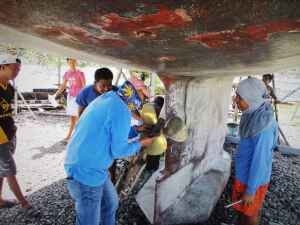 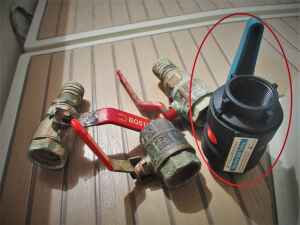 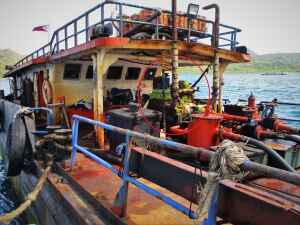