Since we are not regatta sailors, the first probably applies to us, because nobody thinks about the people who have to catch an airplane.
Because of the south-west wind we had to take the passage between Rhodes and Karpathos where the seabed rises from over 1000 meters to 100 meters causing a nasty cross sea.
We pound through the passage for hours. Odin shoots out of the waves at full speed, only to crash back into the troughs of the waves with her 14 tons so that hull and rig tremble.
Our dear Rudi also fights bravely with this “uncomfortable” course, because the stomach and vestibular system are not always of the same opinion on an hour-long roller coaster ride with abrupt stop and go.
We decide not to walk non-stop after all and around two o'clock in the morning we reach the port of Karpathos, the anchor drops and we fall into our beds dead tired and dream of the right wind from the right direction. 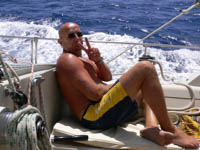 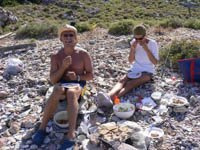 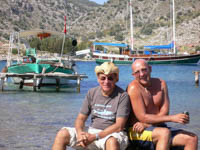 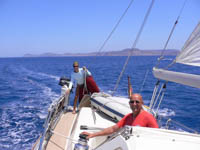