Not everyone who reads the blog here is a sailor and is familiar with the realities of seamanship.

So the sailors of this logbook may forgive me for explaining the courtesy flags.

When you come to another country as a ship, whether it's a small barge or an ocean giant, everyone goes through the same bureaucratic effort with customs, quarantine, immigration authorities, harbor masters, etc.

It is an old seaman's tradition to hoist the flag of the host country above one's own national flag, and some countries are meticulous about following this tradition.

Over time, a whole lot of exotic national flags and pennants accumulate, of which one had no idea what these flags might look like before. (I assume that very few of you know how the national flag of NIUE is designed).

I have collected most of the courtesy flag  that flew under the first spreader on starboard of the mast of Odin during this trip since 2007 and I am curious how many national flags everyone recognizes for themselves. 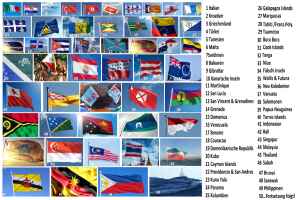